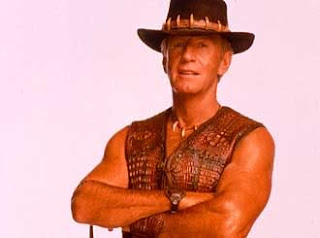 One of the most difficult things that I’ve had to confront in having a stroke involves some of the fundamental issues concerning my manhood and being a man.

Let’s put this in context and give you some background: In Australia, where I come from, men are men.  For my 14th birthday, I was taken walking in the Gammon Ranges by my father, where they only have rain about every 200 years.  We went with his best friend - a real man’s man who goes walking in the Olga Ranges with only a bow and arrow, making his living by hunting feral goats.
So, on my 14th birthday, we climbed a mountain in the Olga ranges and we camped at the top.  It actually snowed there for the first time in 200 years. Masculinity-wise, it was all downhill from there; nowadays, I'm an office and TV studio-bound laptop-masher with one arm that doesn't work, who currently can only get around with a stick.
As you can imagine, my image of what a true man is doesn't exactly match my current situation.


I had a talk to one of my best friends about fatherhood, and he said that while most men are - obviously - physically capable of being a father, most are completely emotionally incapable and inadequate.  If there's one thing that my stroke has done is force me to become more emotionally adequate - so after much deliberation, I feel that in the end I have come to the conclusion that once you have had a stroke you can still be a man and become a real father.  And actually, I might even end up being a better father.


So what do you think?  Do you have to be Crocodile Dundee to raise a child?
Posted by Nottingham's 'Mr Sex' at 12:53 pm

I love my dad with all my heart. He's the wisest, smartest, most knowledgeable man I've ever met and I would consider myself lucky to turn out like him.

Can he wrestle a bear? No. We always leave that to mum. Is he less of a man for it? Fuck you, no! How dare I ask me that.

Some men have their self-worth tied up in their physical selves, but as you know, that can go at any moment. Character is much longer-lasting, and much more valuable in this world than the ability to win a bar fight.

Besides which, the only true test of Dadness is this: how bad are your puns?

You and your mate are right, and so is Anna.

I'm afraid, (but personally slightly relieved!) that your upbringing is a wee bit outmoded in most of the modern world! However, I'm equally sure that it could be very useful in some environments and that it provided good father/son bonding experiences.

Anyone can learn survival skills if he/she wants or needs to. It's not really 'manly' although it's commonly seen as such! It's more 'personly' or 'humanly'! If I was in that situation I'd have taken my kids to do it regardless of their sex.

After all we are the thinking/learning ape!

Hunting feral goats. Not that much of a living, is it? I mean, I'm sure he's a great bloke and all, but it's not the most impressive job in the world. Or even in Australia. I suspect you're doing okay.

Anna is right, it's all about the awfulness of the punning. Never mind this goat hunting malarkey.

I think the important thing is that you take an interest in your child and that they know you love them. If you can find an activity you both enjoy doing together then so much the better, but that can be whateverthehell you both enjoy. Even if it's one-armed origami, what matters is that you're giving time to be with the child/ren.