(Warning: Not suitable for workplaces that don't approve of its staff looking at man-arse)
Sadly, the link at the end of the video doesn't work, which probably means that - sigh - like all great things on 'tinternet, it's fake. Mind you, I have several pairs of old jeans that do the job just as well.
Posted by Nottingham's 'Mr Sex' at 7:36 pm 2 comments: 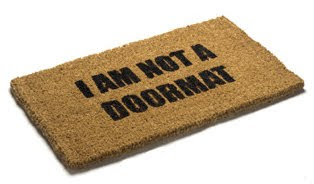 Had a mate back in the day, and he invited me and another mate over to the flat that he'd just shacked up into with his new girlfriend. It was a tiny place, made even more so by the presence of a spoddy lad in a Marillion t-shirt, who skulked about in the kitchen for a while and grunted to himself before going back into his box room.
On our way back to the last bus, me and Other Mate were delivering our reports on his new situation, when I said; "Who's the lodger, then? He's a right moody fucker."
"Well, wouldn't you be, mate? He's her ex."
"What?"
"Yeah. She told him she'd been nobbing a new bloke, and he was welcome to stay, but she was moving him in and he'd have to take the spare room."
"So when's he moving out?"
"He's not. They've been like that for six months already."
Now, if he'd have been a friend, I would have put him straight; if any girlfriend of mine told me that not only been she been knocking off someone else behind my back, but she wanted to move said bloke to live with us, I would have said "No problem. After I've murdered the fucker and buried him under our patio, I'll leave out a fucking deckchair for you." I mean, if a relationship has died on its arse, what you don't do - even if it was you who instigated the break-up - is stick around to watch your partner's new relationship develop.


Which brings us to the case of Charles Judy. Jesus in a jumpsuit, I thought Marillion T-Shirt-Wearing Spod-Cuckold was the King of Wrongness, but this lad takes the biscuit, if not the entire packet. Still hanging round with his ex-wife? No, mate. Going on a date with her to see her new knock-off? No, mate. Allowing her to drive your car when she's banned from driving (and in any case, your car is too knackered for the road)? No, mate. Having no problem with her shaving her flange in the driving seat while you steer from the passenger side? NO, MATE.

Obviously we don't know the whole story - perhaps he was so desperate to get shot of his ex that he'd do anything to drop her into the lap of the first bloke who showed the slightest bit of interest - but you don't want to see your ex's genitals. Particularly when they're dropping pubes on the floor of your car, because they're a bastard to pick up.


So, dear TT readers, today's question is; a) have you ever experienced an example of extreme doormattitude from an acquaintance of yours, and b) what relaxation techniques have you deployed in order to stop yourself from slapping the shit out of them?

(oh, and c): how in the name of God did she manage to keep her hand still whilst defoliating her lady-garden in a moving car? Is this a skill that all women can pull off?)
Posted by Nottingham's 'Mr Sex' at 12:24 pm 6 comments: 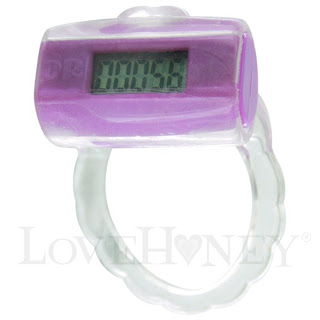 Just over two years into doing sex toy reviews, and we're already having a bang on the cock rings. Oh dear. How soon us chaps burn out.

Now then,  I'm guessing we're all au fait with cock rings and what they do, yes? If you never tried one out, all I need to say is that; a) yes, they work very well at keeping the blood in and allowing our dingly-danglies to stay nice and bulbous when we need 'em to (because sometimes, to paraphrase Beyonce, if you want it, you really have gotta put a ring on it)  and b) no matter how different they look - be they simple bits of thonginess to elaborate cockular confections, they're all pretty much of a muchness. While we highly recommend the ones with the vibratory bits attached (mainly because they give your partner the chance to grind down upon you cowgirl style, and give off the impression that you're wearing this for her pleasure, and not your necessity), essentially there's nothing massively fun about 'em.

On first impression, the Sex Counter is every mildly OCD male's dream product. Whether we like it or not, us chaps are horribly prone to boiling down our sexual performance down to the numbers - usually inches and notches. Thanks to this little puppy, we can now add a third equation; thrusts. Yes, as you've surmised from that picture, the Sex Counter is a nifty pedometer bolted onto a cock ring. Now you can triumphantly stomp into a bar where your recent ex is bitching about you to her mates, throw it on the table, and bellow; "I'M THREE HUNDRED AND THIRTY TWO PUMPS AND A SQUIRT, ACTUALLY"

Instruction Sample: Evidently, the packaging blurb was written by someone freelancing from his regular job of copywriting mentalist Janglish t-shirt slogans. "You have your sexual experience, but do you remembered how hard you tried? Is this the coolest product beckoned you?"

You will also need: Some semblance of a bonk-on.

Looks like: a late 70s girlie digital watch, for a cat.

Feels like: Sad to say, a very flimsy cock ring. I mean, look at the thinness of the ringy bit; if your pubes are the least bit stubbly, you're going to worry about snapping it. I already clocked over 100 'thrusts' just by trying to put the bastard thing on.

Clean-up: This is where the product falls on its arse, alas. According to Janglish Copywriting Man, you're only supposed to use it once, and then lob it. Yes, that buttony bit at the top isn't a reset button; it's supposed to be a clit-teaser. I'm sorry, but I was looking forward to marking my progress on a massive chart over my bed until I finally managed to fill out all five figures on the display, and possibly even clock it, like you used to do on Pac-Man to impress your mates in the chip shop back in the day.  According to a customer review in Lovehoney, however, you can get more than one go out of it with careful cleaning (it's not waterproof), but it's prone to conking out before you do. Hmph.

Partner compatibility: Could be an aid in the battle against premature splodging, mainly because you're going to be thinking about nothing but your score, and possibly even stopping every now and then to have a look at it.

Pros: It's a bit of fun, and adds a whole new dimension to male sexual performance-related paranoia...

Cons: ...but it's essentially a one-shot deal. Hopefully, this is just the start; what I want is something a lot more durable, with built-in features such as a beep every 100 thrusts, a stopwatch facility, a Glow function for night-time use, and a 'Tamacrotchi' feature where a big chunky dinosaur in lingerie demands to be 'fed' by different positions, and then rubs its belly and does a little stompy dance when you've made your partner have an orgasm.

The Sex Counter, was £5 until they ran out of stock, lovehoney.co.uk